15 September 2022, Singapore – Developers’ sales fell markedly from July to August owing to a dearth of new project launches amid the Hungry Ghost month. Private new home sales declined by about 48% to 437 units (excluding Executive Condos) in August, from 834 units transacted in the previous month. This is the lowest monthly sales since April 2020 – during the circuit breaker - where 277 new units were sold.

On a year-on-year basis, new home sales in August were down by 64% from 1,216 units sold in August 2021, where the launch of Watergardens At Canberra helped to boost sales then. August’s sales took new private home sales (ex. EC) to 5,493 units in the first eight months of 2022 – nearly 41% lower year-on-year – as fewer launches crimped transaction volume.

With the depleted stock of unsold new homes in the Outside Central Region (OCR), projects in the Core Central Region (CCR) and Rest of Central Region (RCR) made up the bulk of the top-selling residential developments during the month. The high-end home segment, CCR led sales in August shifting 220 units – up by 19% from July – accounting for half of the monthly sales. Hyll on Holland was the best-seller in August, transacting 42 units at a median price of $2,674 psf. Other CCR projects that helped to lift sales include Perfect Ten and The Hyde which sold 27 (median price $2,942 psf) and 20 units (median price $3,002 psf) respectively.

Developers sold 127 homes in the RCR or city fringe in August – representing a 22.6% decline from 164 units in July. Riviere was the best performing RCR project, with 28 units changing hands at a median price of $2,862 psf. Buyers also picked up new units at One Pearl Bank, The Landmark, Avenue South Residence, and Forett At Bukit Timah at median prices varying from $2,274 psf to $2,635 psf.

In the EC segment, 11 new units were sold in August, marginally down from 12 transactions in July. North Gaia EC sold the most units during the month, moving 5 units at a median price of $1,256 psf.

Developers placed just 134 new units (ex. ECs) for sale in August, compared with 402 units in the previous month. In the first eight months of 2022, 3,105 new units (ex. ECs) were launched for sale, representing a 61% decline from the same period a year ago.

The fall in transaction volume from July to August was expected. There were no new major projects put on the market in August amid the Hungry Ghost month and the limited unsold stock - particularly in the RCR and OCR - have led to more sluggish private new home sales in August.

Specifically, the tightness in OCR supply is perhaps telling in that the sub-market only had 90 transactions during the month. Looking at the August URA data, many OCR projects that are on the market have either been fully sold or have a very low number of unsold units - whittled down to the single-digit in the case of several projects. Many of the unsold units are also likely to be larger apartments which may not suit the needs nor fit the budget of some would-be buyers. The squeeze in supply, couple with genuine demand has led to the strong sales momentum seen in recent OCR launches, AMO Residence in July and Sky Eden@Bedok this month.

In the absence of new mass market launches driving sales, the CCR projects have picked up the slack. Commonly seen as a proxy for the luxury home segment, the CCR sub-market accounted for half of the new home sales in August. According to URA Realis caveat data, Singaporean buyers were behind about 71.5% of the CCR new home sales in August, with foreigners and Singapore Permanent Residents picking up 16.7% and 11.8% of the CCR new units (See Chart 1).

On the whole, foreigners accounted for about 13.3% of overall private new home sales in August – up from 5.1% in July. Generally, we note that the proportion of foreign buyers has climbed gradually from April 2022 with the further easing of border restrictions, compared to the first quarter of the year. 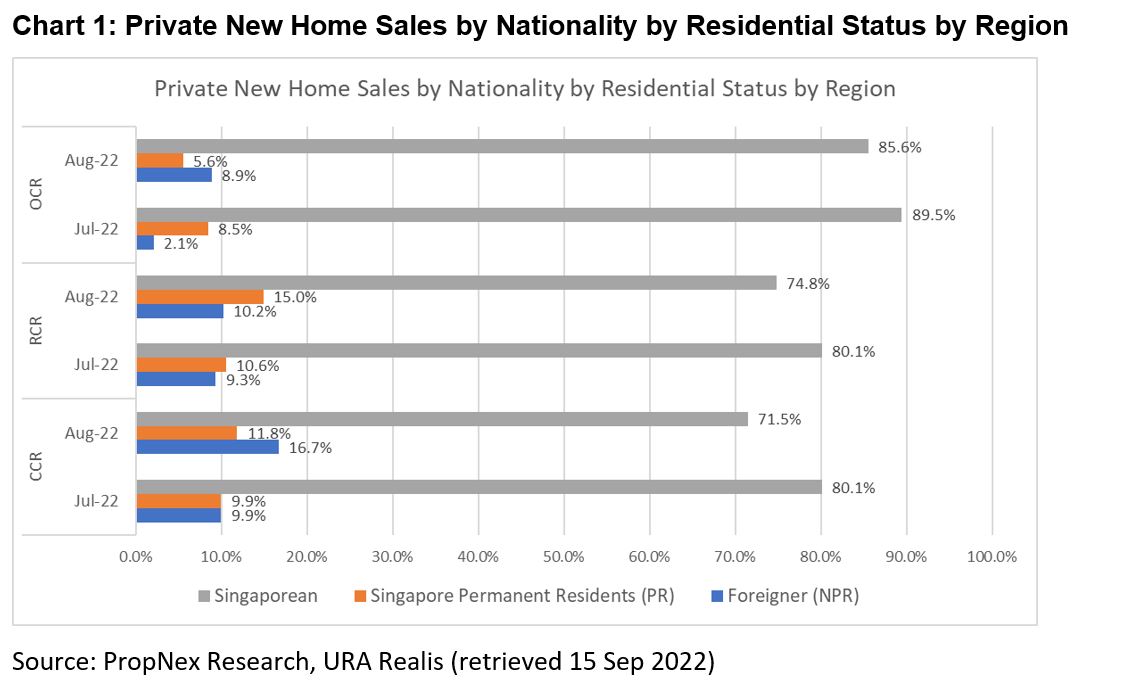 With a couple of new projects hitting the market in September, we could expect the sales figure to improve this month. Sky Eden@Bedok sold about 75% of its 158 residential units when it was launched on 7 September. Another new upcoming project Lentor Modern is also expected to attract buyers. 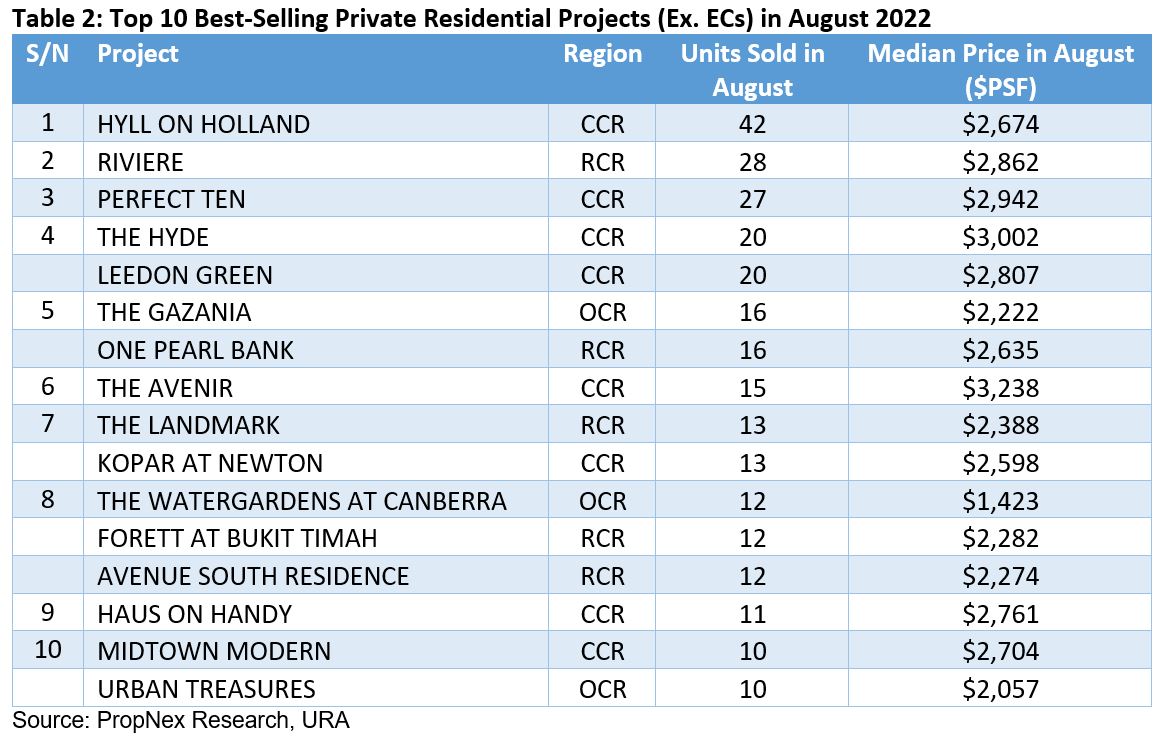 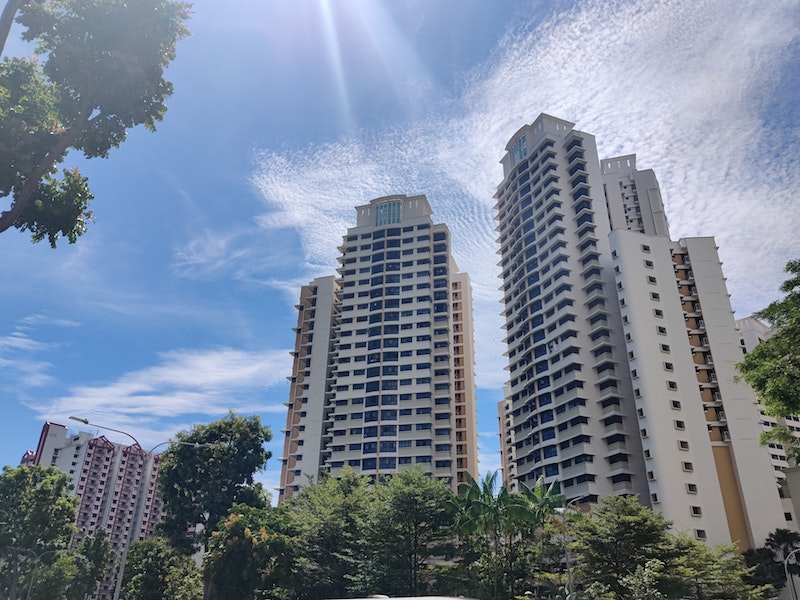 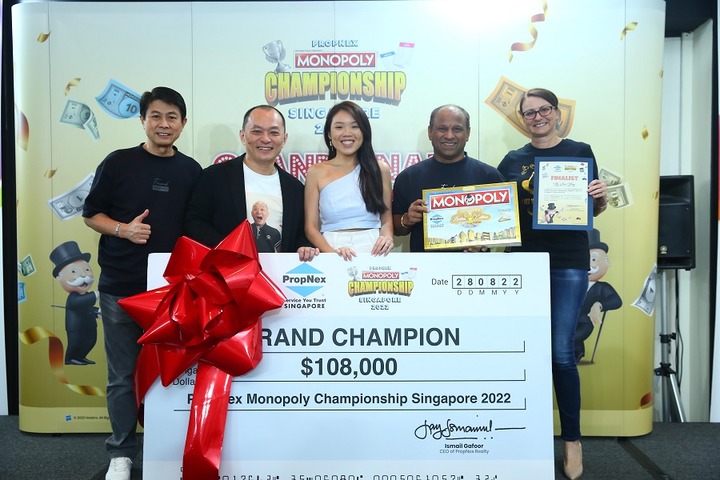 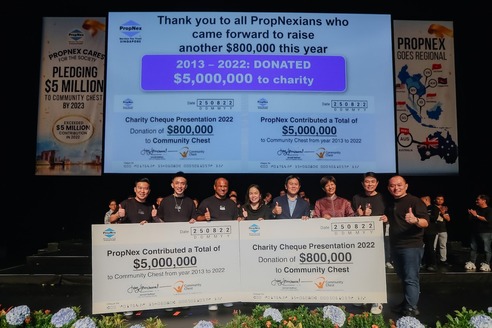